The following article is a reprint of an article written by Andrew Wig staff writer for the Litchfield Independent Review (MN) published January 13, 2011. This is a great example of how the Reverie Harp can be used as music therapy instrument. Section: Community, Page: 1B

Jayne Piepenburg took up wood working just long enough to make a Reverie Harp from a kit she purchased. When she was finished, she donated the harp, designed to create relaxing melodies, to Litchfield Area Hospice as a way to offer comfort to those in need of care.

Jayne Piepenburg wanted to do something to remember her dearly departed father and sister. She just didn’t know what, until she heard a story on the radio one day. They were talking about a new musical instrument, the Reverie Harp, which brought peace and solace to the sick, particularly those in hospice care.

Its heavenly sound is said to offer comfort, bringing about feelings of peace, offering reflection, bringing the listener into the moment – reverie. It can be an escape from the stress and fear that occupies those nearing the end of life – and their loved ones.

The harp’s benefits as a tool for music therapy have long been recognized by music thanatologists, who play the harp to bring bedside comfort to the dying and their loved ones. But until recently, for those finding solace in the sound, it has been a passive experience.

While a traditional harp might seem unapproachable to those unfamiliar with how to play it, the Reverie Harp changes that. Almost anyone can play it, including the sick, immobile and infirm.

The small, lightweight harp is meant to sit in the player’s lap. The Reverie Harp requires no practice or musical training because it is tuned to a pentatonic (five-tone) scale in which all notes harmonize to create pleasing melodies.

As a result, there are no wrong notes to play.

Developer Jerry Brown, owner of Musicmaker Kits Inc. in Stillwater, Minn., and his company’s designer, Matt Edwards, were alerted to the need for such an instrument by Australian music thanatologist Peter Roberts, who wanted something that would make his dying clients more active during therapy sessions.

He challenged Edwards to fill that void. Edwards’answer, in 2007, was the Reverie Harp.

Piepenburg, who lives in Rochester, Minn., but grew up in rural Litchfield, knew the Litchfield Area Hospice could use one of these unique, comforting instruments.

So she gave them one in memory of her sister, Joyce, and father, Hugo.

“They both really loved music and I thought it’d be a nice tribute to them,” she said.

They both enjoyed “old time hymns.” Joyce played the flute in the Litchfield High School band. Hugo played a harmonica and enjoyed attending community dances with his wife, Phyllis, who still lives at the farm 10 miles south of Litchfield where she and Hugo raised eight children.

Making a harp Piepenburg could have bought a Reverie Harp for $550, which most people do, but instead chose to make one herself, ordering a Reverie Harp kit from Musicmakers Kits.

It came in six pieces, plus the strings and brass hardware, and required the following tools:six to eight clamps, wood glue, wire cutter, hammer, electric hand drill, sandpaper, router (optional) and finish – items found at the hip of any handyman. But Piepenburg was no handyman.

“What tools I did have, I had to get.” Piepenburg spread the work out over three weeks, carefully aligning the pieces, gluing, clamping, trimming and sanding. The harp was ready by Christmas, in time to display it to family as they gathered to celebrate the holiday.

“They were kind of surprised because I’m not really a wood-working type person,” she said. “They were a little impressed, I think.” They admired the handsome, egg-shaped instrument, with its mahogany sound board and cherry-wood side panels, and a bare-tree rosette silhouetting the sound hole.

Passing it around at the family gathering, her 4-yearold grand niece, Tess, was especially intrigued. “It was kind of fun to just watch her strum away at it,” said Piepenburg, who had plenty of time to test it herself.

“Even playing with it myself sometimes, it would feel good just to strum it,” she said. “There’s really no wrong way to play it.” A heavenly sound such is how it will help patients of Litchfield Area Hospice, which received the Reverie Harp from Piepenburg shortly after Christmas.

“Even very frail and bedridden people can hold this instrument,” Edwards said.

Aperson can play the harp sitting upright or lying down.

With fingernails, finger pads, or with utensils like a spatula, they can play the instrument in any number of ways.

What matters is the effect.

The harp, with its “heavenly, ethereal sound,” puts them “in tune with what’s going on in the moment,” said Denise Boczek, a volunteer who owns a Reverie Harp, and also plays a stand-up harp.

Touring with both, she visits Stillwater-area nursing homes and hospitals. “It just brings in your mind a feeling of peace.” In her experience, players are at first apprehensive.

The Reverie Harp has 22 strings and an earthy regal appearance – like maybe something Robin Hood might play sitting on a stump in the forest.

But it’s meant for anybody.

Since all the strings harmonize, “you can’t play a wrong note,” Boczek said.

Donna Jo Kopitzke, music coordinator at Rice Hospice in Willmar, was intrigued enough to order 16 of the harps to use at various organizations with which she works with. Rice Hospice uses eight of them.

Having worked with the harps for two years, and having been featured in various media outlets including KARE-TV and National Public Radio regarding the harp, she has had ample opportunity to witness the instrument in action, having especially seen the difference it can make for dementia patients.

“They’ll just start strumming the harp and break into song,” she said. “They’re just delighted to be able to make that music.” Although the harp’s makers say it’s meant more for strumming and not really for song, “You are My Sunshine” and “Amazing Grace” work well, she said.

Interacting with music It is a tool of interaction.

Those unable to play the harp themselves can let it sit on their lap while a family member strums, which is what Judy Loecken, a licensed social worker and volunteer coordinator at Litchfield Area Hospice, did when she brought it to the homes of two hospice clients with dementia.

She plucked the strings as they listened and felt the vibrations through their laps.

“They seemed to enjoy it,” she said.

Piepenburg’s mother, Phyllis, who sewed a bag for the Reverie harp, was there for the Christmas unveiling where the family admired the instrument.

She saw how it enlivened the gathering, and remembers the feeling it brought her, knowing the instrument her daughter lovingly crafted would, in Hugo’s and Joyce’s memory, bring some peace and comfort to those who need it.

“When Jayne made that harp I was just so thrilled,” she said. “I hope it does for them what it did for us.”.

Visible through the sound hole of this Reverie Harp is a label dedicating it to Jayne Piepenburg’s father, Hugo, and her sister, Joyce. Jayne Piepenburg, left, along with her mother, Phyllis, right, visit the offices of Litchfield Area Hospice shortly after Christmas and give a Reverie Harp to Judy Loecken, a licensed social worker and volunteer coordinator at hospice. Jayne made the harp from a kit. The harp has a pentatonic (fivetone) scale where all notes harmonize to create pleasing melodies. “I just hope they use it and use it and use it,” Jayne Piepenburg said.

STAFF PHOTO BY ANDREW WIG Judy Loecken, a licensed social worker and volunteer coordinator at Litchfield Area Hospice, demonstrates the soothing sound of the Reverie Harp. Joyce Piepenburg and Hugo Piepenburg both loved music. Jayne Piepenburg made a Reverie Harp in their honor. 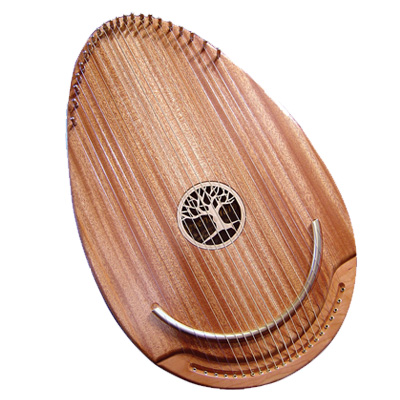