Jerry Brown interviews harp maker Glen Cuthbertson about his background as a piano technician and how that has influenced his harp-making philosophy.

Pictures and a sound sample can be found at the end of the article.

Jerry Brown: I’ve not thought about this before meeting you, but it seems to me that most folk-harp makers today approach the design of harps from a guitar-making (lutherie) background, but you are building your harps from the perspective of a piano technician. Are there some piano-building concepts that transfer over to harp-making? And, if so, what differences do those concepts make?

Glen Cuthbertson: My piano background gives me some ideas that make a significant difference from most of the folk harps I see. My first rule, for example, is “bigger is better”. No getting around that for a great sounding harp. My second rule is “mass equals stability”. No getting around that either. So my harps tend to look more like pedal harps than folk harps, even though I use sharping levers instead of pedal actions.

Jerry: Interesting. That goes against the current trend toward smaller, lighter harps, at least in the Folk Harp community.

Glen: Let me explain how I come to these conclusions. The first rule (bigger is better) involves making best use of what we call the “harmonic curve” which basically tells us to double the string length every time we go down an octave in pitch. Starting at the highest string then, we know by a physics formula that a high C7 nylon (or steel, or gut) string cannot be longer than about 4” vibrating length without breaking. So the next octave lower (C6) needs a vibrating span of about 8”, the next C5 would be 16”, and then C4 (middle C) would be 32” long. This works as well for the upper half of a piano as it does for a harp.

Jerry: It would be hard to fit a harp that tall into a car!

A small instrument requires shorter, thicker strings in the bass range than what is optimum for good vibration. Longer strings can be thinner, and this helps tremendously with purer tones and overall inharmonicities which is a whole other subject. If you ever get a chance, look at the lowest bass strings on a small upright and see how thick they are. Then see the same strings on a concert grand piano and see how much thinner they are. Then compare the tone quality and you’ll hear the difference.

Long bass strings that are not too thick have longer sustain and are more sensitive to your touch, resonating much more readily than shorter, thicker strings of the same pitch. Those long bass strings also dramatically improve the ring of treble notes, just by sympathetic vibration. In a concert setting this helps the instrument sing and project tone. So it is in the lower half of the instrument where the biggest difference occurs, and what a huge difference it makes. Guitar makers are trained to build differently because guitars don’t have the extreme range of pitches (7+ octaves) that pianos have. This gives me a different vantage point to work from.

I recently performed at a Symphony concert in town with my earlier 34-string harp. I participated with 9 other harpists (all girls – I was the only guy!!!), and we had a variety of harps ranging from 3 pedal harps to a selection of lever harps. Everyone was blown away by my harp, even the people playing pedal harps. Mine (which is based on your Regency plan) had much more power in the bass than anybody else, so I knew I was onto a great potential here, thanks to you and MusicMakers!

Jerry: Thanks for the explanation. I’ve also observed that many pedal harps need to be plucked very aggressively to produce much sound, despite their tall size and long bass strings. How do you account for the difference in your harp?

Glen: Pedal harps typically have thicker strings that don’t vibrate as freely as those made for lever harps. That produces shorter sustain, perhaps intentionally, to give more clarity to rapid sequences of notes and chord changes, but I prefer strings that are more responsive to the touch.

Most pedal harps also have thicker soundboards (fronts) than mine. I use the 3mm Aircraft Birch laminate for the front panel on the box, reinforcing it with extra thickness in critical places. This thin laminate responds wonderfully to lighter strings.

Another point I learned from pianos is what is called the “scale break”. This is where the solid (monofilament) strings change to wound strings. On small harps, the shift to wound strings should start higher in the scale than on larger harps due to their milder harmonic curve. I start the wound strings at C3 (octave below middle C) on my big harp. Most smaller harps should probably start at around F3 (F below middle C) to make the parameters of string analysis smooth. This helps explain why bigger harps tend to sound fuller and smoother than smaller harps.

My second rule is having sufficient mass in the structure of the harp. I notice the trend of making lighter and lighter harps. You flirt with diminishing returns by doing this. Pianos are heavy for a very important reason. Long term stability. The strain on an average piano is 20 to 25 tons!!! It must have sufficient mass for absolute rigidity, or tone and tuning stability suffers. My 47-string harp has close to 2000lbs (1 ton) of string tension, so the harp must be solidly built to assure long term stability. I try not to make the harp heavy in the wrong places or for the wrong reasons. I put the mass in the neck and the pillar and sufficiently in the frame of the soundbox.

Another good reason for mass is to keep the energy in the string from dissipating to the wrong parts of the instrument. If the mass is too light, the frame starts absorbing too much string energy and the tone and sustain suffers, making the instrument dull. Strength issues aside, imagine comparing two harps: one made of marshmallows and the other of granite. Most of the string’s energy is absorbed by the marshmallows, thus producing virtually no tone, volume, or sustain. None of the string’s energy is absorbed by the granite, thus all the energy is transferred to the soundboard resulting in maximum tone, volume, and sustain. Of course, you don’t want the soundboard to be made of granite, but the idea is to make the frame massive and the soundboard (front) thin and responsive. Then all the string energy goes toward the soundboard for maximum sound.

The first energy spectrum to be lost in a lightweight harp is the high frequency range which is most readily absorbed not only by the instrument itself but also by the room and furnishings around the instrument. This can make the instrument lack brilliance and sparkle. I keep enough mass in my harps for these reasons. That’s my opinion.

Jerry: So how have your theories panned out so far? No need to mention brand names here, but generally speaking, how does the sound of your harp compare with pedal harps and non-pedal harps you have seen and heard?

Glen: I do not know of any other lever harp that covers the same range as a 47 string pedal harp, so all the extra strings are bonuses in that regard. The longer monofilament strings have a deeper and lusher sound than smaller harps with flatter harmonic curves. Most other lever harps I’ve heard tend to have less of the “singing” quality that I prefer. I like to describe the tone of this harp as having a “sweet sustain that lingers like a morning mist suspended over a mill pond,” but then, I may be a bit biased!

Pedal harps I have tried tend to have a muffled thump or a gonging sound in the bottom octave (below C2), and a weaker sound in the bass register from C2 to C3. You can see the strings vibrate, but you hardly hear them in the music. My harp has a bass that is considerably more powerful and distinct than those I have tried, especially down to C1. Every harp has its strengths and weaknesses and no harp is perfect, but this harp sings with the best I’ve heard in the treble section with a very lyrical cantabile voice. My overall goal here is to raise the lever harp concept to have the power, range, size, and elegance of a concert grand pedal harp.

Jerry: How about string spacing, overall tension, and “stiffness” for playing?

Glen: The string spacing is pretty much standard with 1/2” in the treble gradually spreading to 5/8” in the extreme bass. The tension is higher than average but very even all the way through. No vague “flabby” sections anywhere as found on smaller harps.

This harp is definitely “stiffer” to pluck than smaller harps, but due to the very responsive soundboard it takes no effort to get adequate tone and volume. Indeed, as one gets used to it, the sound and feel is very precise and predictable. Above all, it is very musical, and to me that is the most important element – “Does it inspire the musician and the music?”

Jerry: Thanks for your perspective on harp-making, Glen. Let’s continue this conversation in a future issue of the Journal. I think people will enjoy seeing the “innards” of your harp and hearing more about your history in music.

Glen Cuthbertson is a piano tuner and technician in British Columbia. He took up harp-making a few years ago and has “gone deep” by designing his own harps and achieving extravagant sound and beauty by following principles he learned from tuning and restoring grand pianos. Contact Glen at glencuthbertson (at) hotmail.com.

Jerry Brown is founder and previous owner of Musicmaker’s Kits in Minnesota (harpkit.com) where he still works part-time as an hourly employee. He published the book, Folk Harp Design and Construction in 2003, available in both English and French language. Contact Jerry at treehouse (at) harpkit.com 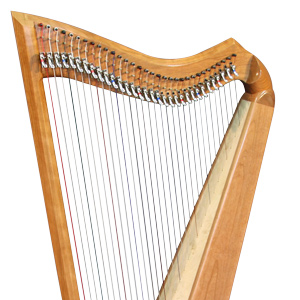 Considering purchasing a lever harp? Musicmakers builds a variety of lever harps to accommodate all harpists from beginner to professional. Our harp selection serves a variety of needs: travel, music therapy, and concert halls. We have something just for you.

Learn More About Our Harps