GREAT FUN PURCHASE!! Easy directions for assembly, even my local music store thought my assembly was just right for a uke (After they stopped laughing at the cigar box..)

Micah is not quite five. He was able to help with the sanding, screwing the neck to the box (after I drilled the holes), holding one end of the strings taught while I tied the knots, threading the strings through the holes in the tuning pins, and turning the tuning key. It was his choice to mount the neck on the bottom of the box so he can open the secret compartment more easily. I glued on the toothpicks, broke off the ends and applied the hand-rubbed (tung oil) finish.

Thanks for the FUN PROJECT!
Peg 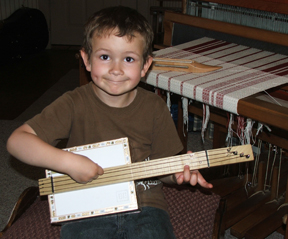 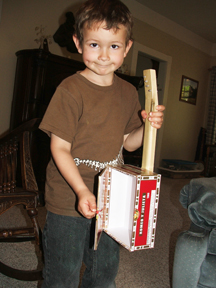 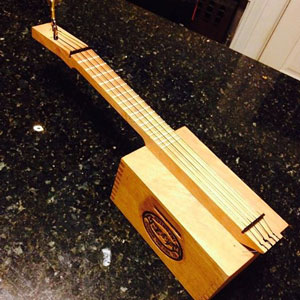 Good afternoon,
I ordered your "Cigar box Ukulele Kit" and couldn't be happier. It arrived yesterday and I went to work on it ASAP. Later that night I had it completed and sounding beautiful. I did use a cigar box I had on hand rather than the one sent with the kit, but purely to play to the aesthetic I was aiming for. This kit really opened up a door for me. I would and will recommend it to anyone else. 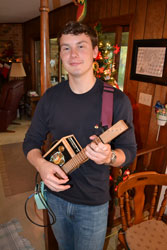 I purchased your cigar box uke kit and love it! I've done a few modifications and added a few bells and whistles. I've included a picture of my cousin holding it at a family event. It's got a handle and a few latches on the bottom to keep in closed, when i'm done with it I just put all of my items (tuner, tuning key, strap, cable, spare strings, paper, pen) inside and close the latches and carry it around like a suitcase. I also added a new pickup from c.b. gitty with a volume pot. Thanks again for the kit, it has opened a big door for me.